When I first went vegan, one of my favorite breakfasts, I had to let go, and that was french toast.

For many years I have made an alternative version, but nothing was like the real thing.

Until now, Just Egg made a vegan egg mix that makes this recipe a reality.

Set a nonstick pan on medium heat and spray the pan with olive oil. In a mixing bowl, place all ingredients in and mix except the bread and cinnamon.

Soak all the bread in the batter and cook the bread until it has a golden color on both sides.

Dash cinnamon and syrup on top of the French toast and enjoy! 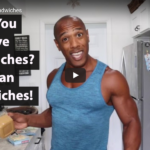 Do You Love Sandwiches? Vegan Sandwiches!
BACKED BY THE BEST